2017 vintage report: A complicated year to say the least 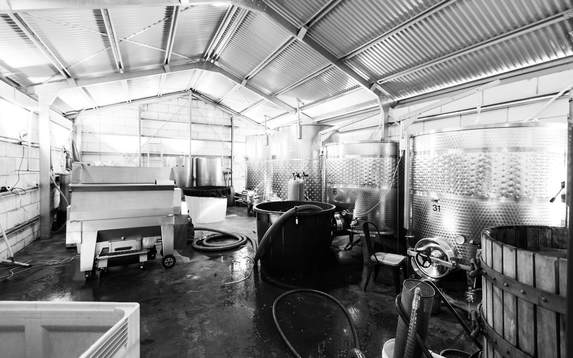 It is often said that the quality of the year can be set in the winter, and by vintage we felt that this was the case. The record amount of rain we received did wonders for our vines and dams. The deep soaking meant that bud burst was strong and flowering stronger. Budburst came on a little later than previous years however the weather was pretty perfect for consistent growth and healthy flowers.

​The summer was hot, but not unbearable, in fact we had some quite cool evenings, and as version set in we started to see a shift in weather. March was complicated, more cold than not, prolonging the ripening period, and it seemed that the closer we got to harvest the more unpredictable the weather would be. Rain once again formed part of the equation with it being quite wet throughout March, this made picking very hard to predict, and disease a real concern.

Chardonnay
We managed to pick the Chardonnay exactly when we felt it was right – in terms of acidity and depth of flavour. We picked all the Chardonnay in a morning and it was processed that afternoon. The fruit was destemmed and crushed, and then loaded by hand into an 800kg wooden basket press. The fruit is then pressed gently and transferred to French barriques for fermentation.

​Our Chardonnay is all fermented in oak from premium French coopers, this vintage will see a total of 27% new oak, with the rest being fermented and settled over winter in 2nd and 3th use barrels. Once fermented dry, we stop the fermentation process to prevent malolactic fermentation from proceeding, this preserves the presence of the natural acidity and complements the overall balance of the palate. The wine will continue to sit in barrel for the next 11 months, at which point it will go to tank for final blending, fining and minimal filtering prior to bottling in September 2018.

Riesling
Due to our Riesling and Gamay vines being only three years old we always knew that there would be inconsistencies in the growing patterns so predicting perfect harvests would always be tricky. Both varietals grew extremely well, due in part to the consistent spring temperatures but more importantly the plants taking advantage of the deep soaking the soil had received throughout winter.

Summer was also kind in the sense that it wasn’t too warm and didn’t stress the vines or fruit development too much. That being said the fruit development slowed down in March – in line with the weather cooling and the rains setting in. This posed a challenge, and we decided to pick a little earlier then preferred on the basis that the quality of fruit would not be compromised and the acid levels would be at levels that would give the wine natural aging potential. In the winery the Riesling fruit was destemmed, crushed and basket pressed, and left in tank to settle for a day at 15C. It was then moved to old French barriques for fermentation.

​Once fermented dry, we sulphured to prevent malo taking place but left the wine on lees to further develop texture and character over the winter months. This wine will be blended and racked into a stainless steel tank in the middle of winter with a view to bottle in early spring. We are extra excited by the progress of this wine, the acid line is excellent and the nose is floral, fruity and nicely balanced.

Gamay
​Gamay too had a prolonged ripening period but unlike the Riesling the fruit was looked plump and juicy and ready to be munched on, by nature! At one point we where loosing 100kg of fruit per day to hungry European wasps – who traveled from a neighboring vineyard that had in previous weeks been devastated by this imported pest. As it was our first vintage it was hard to know what to expect from the fruit, which turned up in quite large clusters, with a little hen and chicken and some berries clearly over ripe and some under – which is a characteristic of the Gamay vine.

​In the winery we decided to split the parcel into two distinct wine making styles, one being a modern new world style, destemming, crushing and fermenting into open vats inoculated with a specific yeast, and an old world style of 100% whole bunch semi carbonic fermentation, gently foot stomped every week. Once fermented dry both were loaded by hand into our basket press for gentle extraction and transferred to old French barriques. They are currently waiting to go through malo, which should happen in early spring when things warm up.

Pinot Noir
Normally we pick our Pinot in one go, however, we have four clones of Pinot which all responded to the conditions in March differently. Our clones are a mixture of vines from the Cote-d-Or (early ripening) and others a littler further south (Vougot) which like it a little warmer. This has meant that this year we fermented three separate Pinot Noir batches with a view to blend them back at a later date. This was the only way we could ensure we got the best fruit, developed in line with the weather conditions. We based our Pinot Noir picking decisions on when we felt the acid levels and flavours had developed optimally. The cool weather didn’t allow for the fruit to develop high degrees of sugar, and as such there was no point leaving the fruit on to be compromised by the rains.

Despite all this, the juice looked splendid: the colour perfect, tannins balanced, palate weight in line with our style of Pinot Noir, elegant, clean and pretty. The fruit was destemmed, crushed and placed into open vats with 15-17% whole bunch for further development of character. The blends then had a week of cold soaking with wild yeast starting the ferment, which was later boosted by inoculation. The complete process of fermentation to press takes around three weeks. The must was gently pressed in our basket press before being transferred to French oak (25% new). The barrels will sit over winter until they start to warm up in spring and malolactic fermentation starts naturally. After 11 months in barrel we will blend the three batches, and gently fine the blend before bottling. We are super excited by this vintage, it shows good potential, balance and freshness.
Proudly powered by Weebly