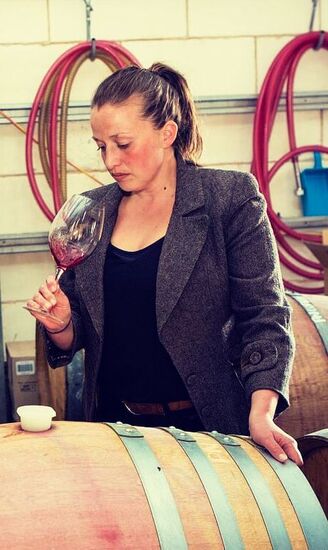 Lyons Will Estate is a family operation. Oliver and Renata craft their wines together and everything is done by hand, with a strong emphasis on sustainability and traditional wine making techniques. Their ethos is simple: ‘look after the vines and the vines will look after the wine’. Good grapes coupled with a minimalist wine making approach results in a good honest wine with a great acid balance and a clean linear finish.

Daughter of an Italian migrant and 5th generation Anglo-Australian family, Renata has had the luxury of being able to tap into a wealth of encouragement from a hard working set of parents.

It was Renata’s dad Joe – a migrant from Calabria who really set the agenda when it came to her passion for food and wine. Joe was an avid wine collector, but not all wines were collectible, most were just wines he loved to drink. From early adulthood Renata had the privilege of trying some amazing wines that he had cellared for 10-15, sometimes 20, years. Through this she developed a keen taste for fine wine.

Renata studied Physiotherapy at university and then decided to travel qualified, spending a lot of time in Italy with family or just jaunting around Europe. She originally had visions of owning a wine bar, similar to the style of bars she saw when living in Torino, Italy. When Ollie started talking about vineyards and wineries, it wasn’t much of a stretch from what she had in mind so it didn’t take much to jump onboard the idea of Lyons Will. Adding to the appeal was the country lifestyle and future plans for a family.

Divide and conquer should be the Lyons Will strapline. In essence this means that Renata is in charge of the direction and the winemaking of both the Riesling and Gamay – taking inspiration from recent trips to Beaujolais and Burgundy. While fairly new to the winemaking world, Renata has spent a good part of three years working alongside Shaun Crinion (Dappled), learning and developing her craft.

In her spare time Renata completed a PhD in public health, became a mother of two children (Charlie and Julian) and still works as a researcher.

​Originally from London, England, as the child of parents working in the petroleum industry Ollie spent most of his childhood moving between counties in the Americas and Africa. In the mid-nineties the family finally immigrated permanently to Western Australia.

​​Never a fan of schooling and more interested in adventure he scraped through high school with average grades at best, eventually leaving school and settling for a job in digital advertising at the age of 17 in the UK. Penniless, alone, and without any qualifications, at 20 he realised that it was time to knuckle down and focus on a career. Luckily he had entered the fast-growing industry of digital advertising and over the next 20 year he reaped the rewards of endless late nights and hard work, eventually becoming the managing director of his ad agency at 28.

After 10 years abroad, he decided to come home and continue his career in Melbourne, a city he had never visited but fell in love with instantly. A few years into settling in he met his now wife and best friend Renata. ​"It was a ‘96 Moss Wood Chardonnay that we both shared which catapulted my passion for wine, wine making and viticulture..." Soon after Ollie enrolled in the viticulture night course at NMIT.
​
Ollie continued to work in advertising and study through the night whilst chasing his dream of purchasing a vineyard. After much research and fact finding in the summer of 2013, Ollie and Renata finally settled on what was then a small vineyard and home, and what is now Lyons Will Estate.

Ollie completed his viticulture certificates in 2014 and worked hand in hand with mentor and friend, Shaun Crinion (Dappled) for three vintages honing his wine making skills and developing his own style. Since then he has travelled to many regions taking inspiration from winemakers far and wide and is heavily involved in the Macedon Ranges Vingerons Association. Ollie's focus at Lyons Will is the Chardonnay and Pinot Noir as it is these varietals that he feels most passionate about.   ​

Click here for a small video on Lyons Will Estate.  ​
​What is behind Lyons Will, the name..

It is fair to say that for both Renata and Ollie, their grandparents proved to be extremely influential people. Not only did they leave an indelible mark through the way they went about their day to day lives, but they were also, more importantly, intensely passionate about their careers.

Ross Lyons was born in Mallala, South Australia (01.06.1920) and grew up a farm hand. His passion for livestock and farming never waned and it was this passion that drove him to create Coonara, a 1000 hectare sheep farm in the western districts of Victoria. To this day, his son (John) and grandson (Kym) still run the family farm, which has expanded to cover much more than sheep and is a true testament to a diversified agribusiness. Renata was close to Ross for many reasons. It was the time spent with Ross that inspired Renata's passion for all things country, so when presented with the opportunity to create a small agricultural business in a setting as stunning as Lancefield the idea proved too much to pass up.

Helen Rapson (maiden name Willis) was Oliver's grandma. She endured the hardship of war, coming out the other side with a razor sharp commitment to her career for years to follow and earning a PhD in Botany. Her ground breaking work in the field of tomato diseases in the late 50s proved to be a cornerstone for disease prevention in that industry for some time. However, it was her overall interest in general botanical science that really interested Ollie. She inspired Ollie’s interest in botany but nothing really tickled his fancy until he discovered wine. The complicated science of viticulture, coupled with winemaking, and the many, many, moving parts that encompass the wine making process from start to finish provided him with a challenge too great to pass up, and offered a way to appease the obsessive compulsive in him.

Although they do not come from a long established bloodline of wine makers, what inspires Renata & Ollie are the risks and dedication it takes to run a country business, the hard work and passion it requires for a successful outcome but most importantly the many, many rewards country living can provide. From the satisfaction of growing a great bunch of chardonnay, to sitting back and taking in the glorious sunsets, the real driver for them is the enjoyment they get from the unique beauty this environment provides for them, a beauty which they can share with their own young family today and in years to come.

"We hope we can somehow encapsulate a little bit of this place in every bottle, and if so, then I think we have done Lyons Will Estate and our grandparent's legacy justice."
​
Follow @lyonswillestate
Proudly powered by Weebly