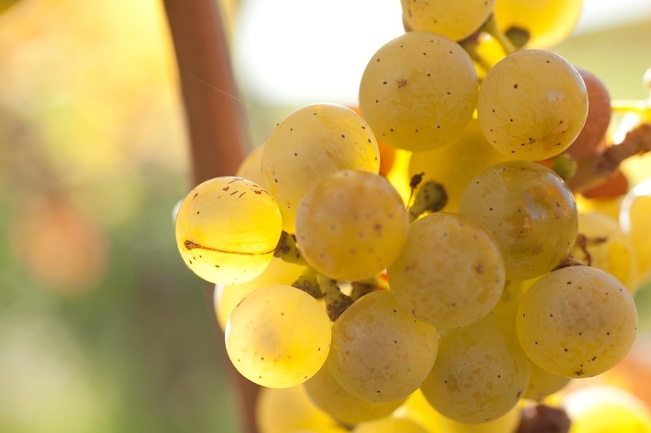 Riesling is a white grape variety which originated in the Rhine region of Germany. Riesling is an aromatic grape variety displaying flowery, almost perfumed, aromas as well as high acidity. It is used to make dry, semi-sweet, sweet and sparkling white wines. Riesling wines are usually varietally pure and are seldom oaked. As of 2004, Riesling was estimated to be the world's 20th most grown variety at 48,700 hectares (120,000 acres) (with an increasing trend), but in terms of importance for quality wines, it is usually included in the "top three" white wine varieties together with Chardonnay and Sauvignon blanc. Riesling is a variety which is highly "terroir-expressive", meaning that the character of Riesling wines is clearly influenced by the wine's place of origin.

In cool climates, (such as many German wine regions) Riesling wines tend to exhibit apple and tree fruit notes with noticeable levels of acidity that is sometimes balanced with residual sugar. A late-ripening variety that can develop more citrus and peach notes in warmer climates (such as Alsace, parts of Austria). In Australia, Riesling is often noted for a characteristic lime note that tends to emerge in examples from the Clare and Eden Valley in South Australia. Riesling's naturally high acidity and pronounced fruit flavors gives wines made from the grape immense aging potential with well-made examples from favorable vintages often developing smokey, honey notes and aged German Rieslings, in particular, taking on a "petrol" character.

The Riesling Block was planted in November 2013 and is approximately 2.5 acres and consists of two clone varietals, Pewsey Vale & D2V2. Our first harvest from this block was 2017, our production for this vintage was just under 0.7 tonnes per acre resulting in a final production of 760 bottles.